From Enter the Gungeon Wiki
(Redirected from R&G Department)
Jump to: navigation, search 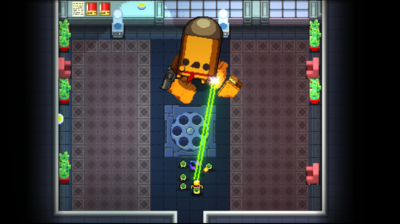 The R&G Department is a secret chamber that was added in the A Farewell to Arms Update.

Unlike other floors, the R&G Department has a fixed layout; however, the enemies in each room may vary slightly from run to run.

Also unlike other floors, there is no elevator at all. The player has to jump inside one of the pits found around the boss room to proceed to the next one, effectively jumping out of the R&G Dept. building itself. The player will, however, come through an elevator when entering the Forge even though no elevator can be seen in the transition to it.

It can be accessed by giving the Sell Creep one Master Round and any other 2 items or guns (including Junk) in a special room in the Hollow. This room is always available if you enter The Hollow with at least one Master Round. After giving him enough items or guns, he will break the grate, letting the player down to the next floor.

This is the layout of the R&G Department: 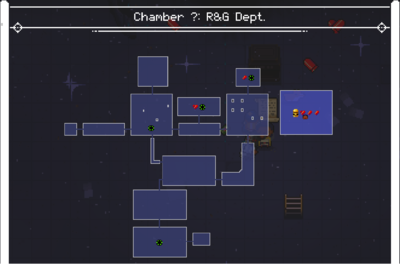 The three rectangular rooms at the bottom have a futuristic tileset. The others are offices.

None of the enemies (including the boss) in the R&G Dept. have official Ammonomicon entries. In addition, all of them exhibit behavior derived from other existing enemies.