From Enter the Gungeon Wiki
(Redirected from Rainbow Chest)
Jump to: navigation, search

Chests are objects that can contain pickups, items, guns, and more. Chests are always found in treasure rooms, but can also be found upon completing a room, using certain shrines, completing one of Winchester's games, or in secret rooms.

Chests can be found locked or unlocked; locked chests need a key to be unlocked, while unlocked chests can be opened for free. Chests found in treasure rooms are always locked, and always contain an item or gun.

On every floor, one treasure room chest will contain a gun while the other will contain an item. This does not affect drops from destroyed chests, meaning a chest that would normally have an item can drop a gun when destroyed.

Upon entering a room with a chest, there is a random chance that a fuse will appear by the chest. If the chest is not opened within a short period of time, it will explode, leaving behind nothing. Any item or weapon that can spray a liquid (except for oil) can douse the fuse and stop it from exploding.

Chests can be destroyed by shooting them. This will often cause them to drop inferior loot, such as pickups, items or Junk. They may instead explode, damaging the player if they are too close. Destroyed chests have a 60% chance to drop Junk if the player has no keys, and this chance increases to 72% if the player is holding at least one key.

Chests can rarely be replaced by Mimics. This chance increases with each point of curse the player gets.

The order of chest rarity and quality of items inside from most common to least common is:

All chests can contain various pickups in addition to an item or gun.

) chests have a high chance of dropping items, over any other type of collectible.

Each floor has different chances for different chest qualities, with chances for higher quality chests increasing on later floors. This does not account for magnificence.

There are two different loot tables within the game, the Original loot table (which was the loot table before the Advanced Gungeons & Draguns update) and the Gungeons and Draguns loot table. These can be switched between in The Breach or title screen in the Gameplay menu of the Options menu.

synergy. The quality of the item or gun will be random, whether or not it completes a synergy. If the chest turns red, there is still a chance that the item that is dropped will have a synergy.

After freeing Synergrace, Synergy chests will appear randomly in the place of regular chests past the first chamber, and will always have a fuse. They have a roughly 5% chance to replace a normal chest, and one is guaranteed to spawn after defeating Old King. They can also be purchased from Synergrace.

It is possible for rat chests to be mimics, though not by holding the Mimic Tooth Necklace, which has no effect, other than bringing out a local mimic union member NPC to warn you that there are simply too many chests in the room and they couldn't agree to that deal.

If the Resourceful Rat is killed with one player dead in co-op, all the chests can be opened without the use of a key. This does not revive the other player.

Rainbow chests are never locked. However, they can be locked when they appear as a brown chest.

Rainbow chests contain 8 items and/or guns, which consist of approximately 15%

. They can also transform into synergy chests upon being opened, containing 8 items and/or guns that synergize with items/weapons currently held, similar to an actual synergy chest. 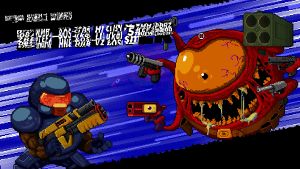 Fight screen of the glitch boss after opening the chest and entering the boss room.

Glitch chests have a 0.1% chance to appear, and they can only appear in the Keep of the Lead Lord, Gungeon Proper, and Black Powder Mine after the Beholster has been killed at least once and the player has entered the Gungeon more than 10 times.

Opening a glitched chest instantly takes the player to a glitched version of the next floor that contains nothing but a boss room with two glitched Beholsters. Defeating the bosses rewards the player with normal boss rewards in addition to 7 guns or items and numerous pickups.