Here's a neat one (all 3 chests are mimics, and no I didn't have a tooth necklace) 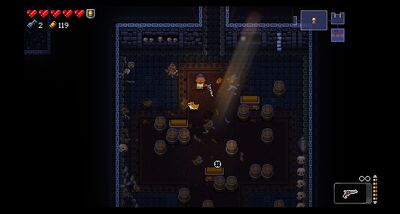 tip, fire can be placed on the other side of the wall, so using a molotov(launcher) you can check. kinda pointless as you already should have another weapon but still fun.

I've been trying to find out a way to reliably find secret rooms and it seems only certain rooms are capable of having secret rooms in them. Most often they're found on the open sides of chest rooms and in the shop, but other times specific rooms will have them. Secret rooms tend to not have pots in front of them, and their openings tend to be where other rooms entrances could spawn. It does not seem to matter what style of decor the room has, E.g in Keep of the Lead Lord you can have chest rooms with wood walls and floor stone walls and wood floor and both stone walls and floor. I've been screen shooting full maps with the location of the secret room and a 400x400 shot of it's entrance to try and compile some of the data. I try not to capture rooms and entrances I already have. Here's what I've got so far.

The Keep of the Lead Lord

Abbey of the True Gun

fire over a wall

The "Notes" section of this page mentions that "Secret Room entrances are never behind props."

I assume that they mean Objects instead of Props, but I'm a newbie to the Gungeon so...